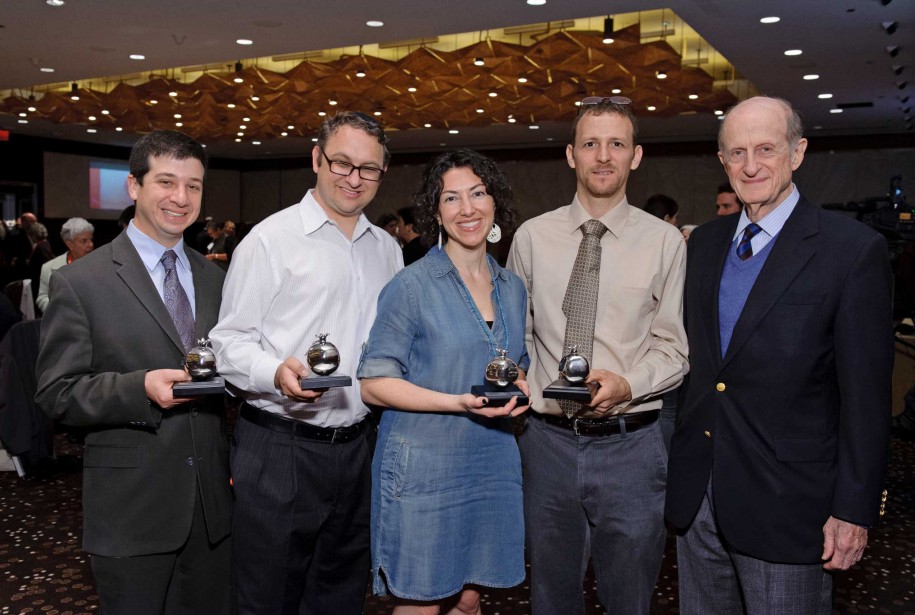 “We know that encouragement early on in a person’s career can make all the difference in their success,” said Keating Crown, a member of the Foundation’s founding family, as he introduced the Pomegranate Award recipients to Jewish lay, communal and educational leaders gathered at the Foundation’s annual award ceremony here today.

“The recipients will have the opportunity to connect with thought leaders and extraordinary educators from across the spectrum of Jewish life through events sponsored by the Foundation over a three year period, and five new educators will join the cohort each year,” said Jordan Goodman, a member of the Crown family.

The Covenant Foundation is creating a growing network of Pomegranate Prize recipients and providing a laboratory and platform for them as they immerse themselves in foundation-supported professional development and leadership programs, peer-to-peer gatherings, mentorships and other educator initiatives.  Each recipient receives a $15,000 fund to fuel educational projects and their development as change agents in their communities and in Jewish education.

“The Pomegranate Prize nurtures the seeds of emerging talent and publicly recognizes potential to contribute to a more promising future for Jewish education,” said Eli N. Evans, Chairman of the Board.

The Pomegranate Prize, and the resources dedicated to the recipients, is an investment in the future of Jewish education, said Harlene Winnick Appelman, Executive Director of The Covenant Foundation.

“A teacher’s passion can spark the interest of a generation and encourage positive social growth.  The Pomegranate Prize is a unique and powerful tool to support that passion, not only by identifying new levels of excellence and by encouraging specific innovations, but also by creating a community of problem-solvers, building the skills of individuals, and mobilizing new talent.”

Risa Alyson Cooper is Executive Director of Shoresh Jewish Environmental Programs in Toronto. She completed her B.A. in Religious Studies at Queen’s University, and her M.A. in Jewish Environmental Ethics at the University of Toronto. She worked as a Jewish environmental educator at the Teva Learning Center and transitioned into small-scale organic farming as a member of the Adamah Fellowship. In 2009, she returned to her native Toronto to serve as Executive Director of Shoresh and establish Shoresh’s Kavanah Garden. She is a recipient of the Joshua Venture Fellowship for her role in establishing Shoresh’s Bela Farm, a rural center for sustainable, land-based Judaism in Ontario.

Rabbi Lizzi Heydemann is the Founder of Mishkan Chicago, a spiritual community that seeks to reclaim Judaism’s inspiration, warmth, and transformative essence. She was the first Revson Rabbinic Fellow at IKAR in Los Angeles, where she was involved as a congregant, musician and rabbi. She is a 2013 ROI Fellow, was a 2012 Rabbinic Fellow of CLAL’s Rabbis Without Borders, and is on the 2012 list of young influential Jews issued by JUF’s OyChicago. She grew up in Chicago, graduated from Stanford University and was ordained by the Ziegler School of Rabbinic Studies. Her interest in creating spiritual experiences that integrate the spirit, body and mind, and that meld music and harmony with intellectual rigor, led to her found Mishkan Chicago in 2011.

Rabbi Yechiel Hoffman is the Director of Youth Learning & Engagement at Temple Beth Am in Los Angeles. He served as LimmudLA’s Executive Director, was an experiential educator and Jewish Studies teacher at Milken Community High School in Los Angeles, and created the Teens@LimmudLA Presenters program, the Viral Judaism Project, and the High School Jewish Futures Project. He most recently co-founded JEDLAB, a field-wide Jewish education network, promoting a relationship-driven approach to collective inquiry, collaboration and experimentation to further the quality and growth of Jewish education. He serves as a rabbinic adviser and community activist for LGBT inclusion, women’s issues, and innovation. He received his B.A. in Media Communication Arts from the City College of New York, his Rabbinic Ordination from Pirchei Shoshanim, and was a DeLeT fellow. He is studying network learning for his thesis research towards an Ed.D.

Rabbi Todd Markley is the Associate Rabbi at Temple Beth Shalom in Needham, MA.  He has played key roles in the transformation of youth programs for students in grades 6-12 and learning programs for children in kindergarten through fifth grades and their families. He completed his studies at Hebrew Union College-Jewish Institute of Religion, receiving a M.A. in Jewish Education in addition to his rabbinical ordination. A native of Connecticut, he was an active youth leader in the North American Federation of Temple Youth (NFTY) before attending Tufts University, where he studied Psychology and Judaic Studies. He has served on the faculties of the Union for Reform Judaism’s Crane Lake and Eisner Camps.

Yonatan Rosner is a Judaic Studies teacher at New Community Jewish High School in West Hills, CA. He teaches Jewish text, coordinates the Drishot Shalom program, oversees curricula for exchange programs with Israeli high schools, and has conceptualized and developed the school’s unique T’fillah Kehillah Institute (TKI). He uses technology and project-based learning to engage students in Jewish wisdom, and has created a myriad of virtual classrooms online. He graduated from the Educators Program at Pardes Institute of Jewish Studies, and earned his M.A. in Jewish Education from Hebrew University.