It will be the fourth such installation led by Jewish history teacher Lilach Taichman, who returned recently from Centropa’s seventh Summer Academy, this year in Berlin. The on-the-ground exposure to European Jewish history was her second under the Centropa umbrella.

The Vienna-based organization seeks to deepen educators’ understanding of the rich Jewish experience in Europe and aims to recalibrate and broaden the teaching of 20th century Jewish history beyond the Shoah itself.

“I don’t want to teach Jewish history as a litany of persecutions as I learned it,” Taichman said. “Centropa has equipped me with the experiences and context and tools to teach and share with my students how Jewish communities lived, and what they contributed, rather than just focusing on atrocities.”

It is this emphasis on Jewish life – from the mundane to the soaring – that Centropa encourages by exposing educators to history where it happened, communities where they existed, and those who lived through the era, all the while empowering teachers to design and share best practices and bring it all home to classrooms.

The idea for the exhibit, which in past years examined pre-war Jewish communities in Czechoslovakia, Poland and the Balkans, came to Taichman after she participated in Centropa’s 2010 Summer Academy in Budapest, Prague and Vienna.

“These are ninth-graders and they are young, but they are taking ownership and getting connected in a large and fulfilling way,” she said. “When we teach a positive past, we help them strengthen their positive Jewish identity and self-image for the future.”

Centropa seeks to expand students’ knowledge of European Jewish history of the last century beyond the years 1933 to 1945, said founder Edward Serotta.

“We want our teachers to embrace 20th century Jewish history in its entirety and fullness, beyond just the concentration camps and shtetls.  To focus only on that, as is often done, is ahistorical and it is wrong.  The subject needs to be taught within a larger framework.”

At the heart of Centropa’s approach is a vast collection of family images and oral histories with nearly 1,300 elderly Jews – extraordinary stories of Jewish life and community in 15 countries between the Baltic and Aegean Seas.

With these as a nucleus, the organization has built a powerful and ever-growing collection of educational materials, including original videos, tutorials, lesson plans and blogs that engage and connect educators.

Regional seminars for educators take place each year in the United States, and since 2007, a summer institute in Europe convenes teachers from around the world for more in-depth exposures and professional development.

Balancing Past and Present:  A Jewish Educator’s First Steps in Berlin

It was at our very first session that Ed Serotta, founding director of Centropa, stood before us in the Centrum Judaicum of the Neue Synagoge, and said, “No Jew comes to Berlin happily…[more]”

Rivy Poupko Kletenik, Head of School and Jewish Studies teacher at Seattle Hebrew Academy – and a 2002 Covenant Award recipient – made her first trip to Berlin for Centropa’s educator institute in July. Exposing students to the full spectrum of 20th century European Jewish history is a necessity, especially when it comes to younger students, she said.

“They have plenty of time to learn about tragedies,” she said, noting that her school enrolls students up to eighth grade. “There is so much more that needs to be shared. We need to make sure they know there was a rich Jewish history before the Holocaust, and what reemerged after it.”

Shmuel Afek, a social studies teacher at the Abraham Joshua Heschel School in New York City, and a participant in three Centropa institutes in Europe, agreed.

His school principal and department head have taken part in Centropa programming as well, and a more expansive approach to teaching history has been embraced as a result, including a curriculum overhaul.

“We are taking 20th century Jewish history more seriously than we have here,” he said. “Historically, our treatment has ended in 1945.  But that doesn’t make any sense. The story is ongoing.  It is complex and complicated, but it is part of who we are as human beings and as Jews.”

From the student-led exhibitions at Barrack Hebrew Academy, to curriculum reviews at the Heschel School in New York, the Centropa imprint is being left at Jewish schools exposed to the organization’s programming.

And being that Centropa’s core materials are digitally based, they play directly into the current emphasis by the education field to embrace and advance more tech-friendly tools and approaches.

At Seattle Hebrew Academy, a new initiative is putting laptop computers in the hands of older students, allowing them to connect with students in Central and Eastern Europe and elsewhere to share stories, histories and lessons.  And at the Heschel School, students have mimicked Centropa’s video approach to research their own family histories and produce historical videos, a project that has involved multiple departments there.

“We as educators are always looking for ways to enhance our classrooms and engage our students with the smart use of technology,” said Laura Frank, who teaches Jewish history at Beth Tfiloh Dahan Community School in Baltimore, and participated in three Centropa institutes in Europe.

“Centropa has innovative ways of using technology, ways that are user friendly and elegant.  That has helped me transform my classroom into one where technology has a central place.”

She too has borrowed the video approach and has led her students through Jewish storytelling using the medium. And she is beginning a partnership with a teacher in Prague – one that she met at a Centropa program – so that student-to-student connections and joint projects can be created.

Educators said that being at a Centropa summer institute in Europe is the epitome of professional development due to the richness of first-hand experience and exposures in places where the history they teach actually unfolded.

“When I come back to America,” Frank said, “I am filled with such desire to transmit and share with my students.  And they feed off my passion with an enthusiasm and engagement that is just remarkable.”

Balancing Past and Present:  A Jewish Educator’s First Steps in Berlin 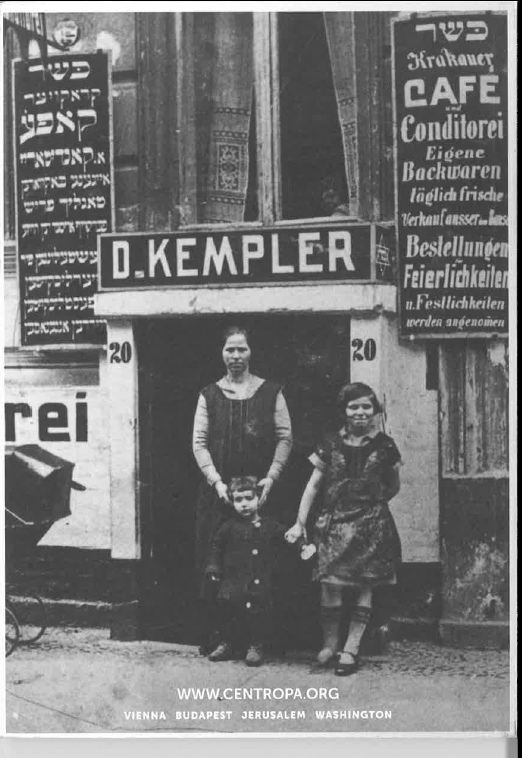