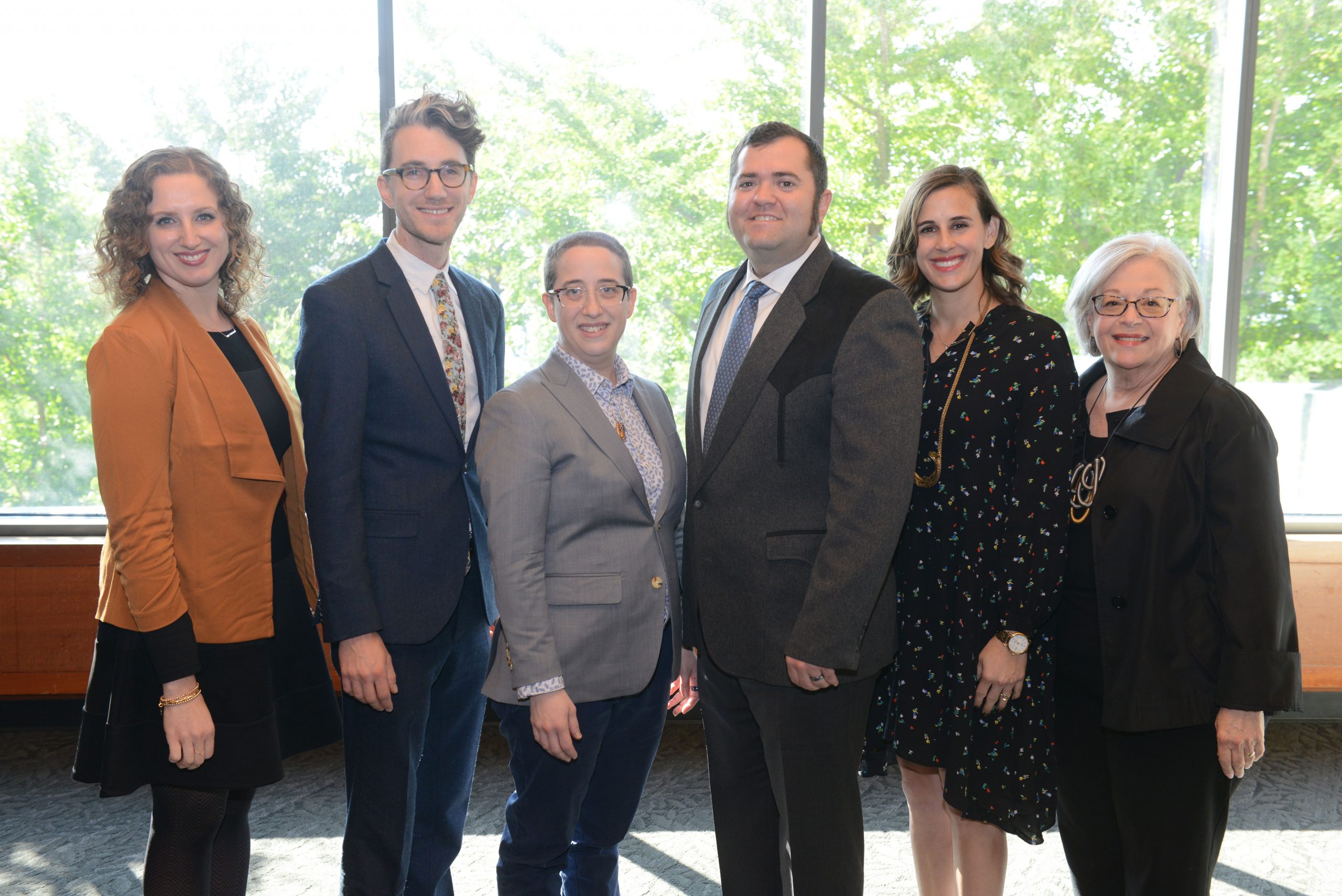 New York, NY – Nov. 6, 2019 – Five emerging Jewish educators received the 2019 Covenant Foundation Pomegranate Prize today at the annual Pomegranate Prize ceremony. This year’s Prize recipients join 40 others, who, since the Prize’s inception in 2011, have trailblazed a path toward the most dynamic, responsive, inclusive, and creative ideas in Jewish education.

The Pomegranate Prize, inaugurated eight years ago, is designed to honor rising leaders who have been in the field of Jewish education for up to ten years. By encouraging Prize recipients in their pursuits, and enabling them to accelerate their professional development and amplify their impact on the field, The Covenant Foundation aims to nurture Pomegranate Prize recipients in an intentional way, and empower them to take risks and make a difference in the field of Jewish education.

The Prize stands next to the Covenant Award, which since 1991 has honored three exemplary Jewish educators each year for innovation and impact across Jewish education settings.

“The five 2019 Pomegranate Prize recipients are truly multi-talented, which is reflective of an important trend in Jewish education,” said Cheryl R. Finkel, Board Chair of The Covenant Foundation, who also presented the Prize on Wednesday. “By enhancing their educational practice with skills in visual arts, music, literature, community engagement strategies, and creative problem solving, they offer the learners they work with a more well-rounded and rich Jewish learning experience. We are so excited about the potential they promise to the field.”

“It is a tremendous privilege to welcome a new cohort of Poms each year, each of whom offers an innovative and impressive slate of accomplishments,” said Harlene Appelman, Executive Director of The Covenant Foundation. “And it is so encouraging that the field continues to produce Jewish educators year after year who are as motivated, as creative, as engaged, and as talented as our first cohort was in 2011. May we always be surrounded by the kind of excellence that is on display this morning.”

Rabbi Matthew Dreffin is Director of Education at the Goldring/Woldenberg Institute of Southern Jewish Life (ISJL) in Jackson, Mississippi. An artist and advocate, nothing inspires him more than fostering meaningful Jewish moments; for Matt, when it comes to Jewish education, “good enough is never good enough.” His role at the ISJL allows creativity and high-level strategic planning while also demanding teaching, scholarship,

and above all, the mentoring and direct supervision of a team of a dozen young emerging educators. Matt previously served as Rabbinical Intern at Congregation Shir Ami in Castro Valley, CA, and Temple Judea in Tarzana, CA. He received Rabbinic Ordination and Master’s degrees in Hebrew Letters and Jewish Education from Hebrew Union College-Jewish Institute of Religion where he was also a Mandel Fellow. Matt holds a Bachelor of Fine Arts in Studio Art with a concentration in Hot Glass Sculpture from Tulane University, and he continues to make art in his personal studio.

Natan Kuchar is the Director of Edah, a thriving Jewish and Hebrew integrative afternoon school program in Berkeley, California. Natan supports the community of families and educators at Edah with an emphasis on creativity. In addition to working at Edah, Natan serves as Lead Youth Educator at Congregation Beth Israel in Berkeley, and was formally Music Director, Informal Jewish Program Manager, and an educator at the Jewish Community High School of the Bay. Known for bringing together whole communities in song, Natan is a passionate advocate for connecting people through thoughtful, joyful experiences that respond to the needs of the community. He earned his Bachelor of Music degree from Berklee College of Music in Boston, MA, and a Certificate in Arts Integration from the Alameda County Office of Education where he is also an active faculty member. Natan was recently honored by Berkeley Mayor Jesse Arreguín for his outstanding contribution to the arts.

Na’amit Sturm Nagel is an English teacher and Associate Director of The Shalhevet Institute at Shalhevet High School in Los Angeles, California. In recognition of her revolutionary work on Jewish identity, her 12th grade Jewish Literature class received funding from the Jewish Education Innovation Challenge. Na’amit also serves as Associate Director of The Shalhevet Institute, the high school’s center for Jewish ideas and community learning. In this role, she regularly engages with leading Jewish thinkers and arranges speakers and events for the community. In addition to her work at Shalhevet, Na’amit organizes essay writing workshops for high school students as part of UCLA’s Writing Project and has facilitated an evening book club on Jewish memoirs at the Skirball Cultural Center. She has published op-eds and book reviews in The Forward, Lehrhaus, The Jewish Journal, and Kveller. Na’amit holds a Bachelor’s degree in English and History from the University of Toronto and a Master’s degree in English from Brandeis University.

Shara Peters is Head of School at Adat Ari El Day School in Valley Village, California. Her passion for education lies in project-based, integrated learning through the lens of design thinking. She previously served as a middle school teacher and Curriculum Coach at Sinai Akiba Academy in Los Angeles. Shara cohosted Find Yourself a Teacher, a podcast about Jewish day school education, and has been published in Scientific American, Education Week: Teacher, and Association for Supervision and Curriculum Development’s MiddleWeb. She recently participated in the Ethical Creativity Institute at The Brandeis School of San Francisco. Shara was a fellow in The Jewish Theological Seminary’s Day School Leadership Training Institute (DSLTI) and completed the Day School Leadership through Teaching (DeLeT) program at Hebrew Union College-Jewish Institute of Religion. She received her Bachelor’s degree in Modern Jewish Studies from California State University, Long Beach, and her Master’s degree in Education from American Jewish University.

Beverly Socher-Lerner is the Founding Director of Makom Community in Philadelphia, Pennsylvania. An innovative and passionate Jewish educator, Beverly believes that people are hungry for both meaning and community. She brings Jewish wisdom to families and children through joyful, meaningful learning and gathering in community. Prior to launching Makom Community five years ago, Beverly directed synagogue schools at Congregation Shaare Tikvah in Waldorf, MD and Temple Beth Sholom in Cherry Hill, NJ. She also served as Program Director of Mount Freedom Jewish Center in Randolph, NJ. Over the last ten years, Beverly has developed over 40 new curricula for students and families of all ages. She recently completed participation in UpStart’s tenth Accelerator Cohort and was previously a fellow at Yeshivat Hadar. Beverly received her Bachelor’s degree in Jewish Studies from the University of Maryland and her Master’s degree in Jewish Education from the University of Pennsylvania.