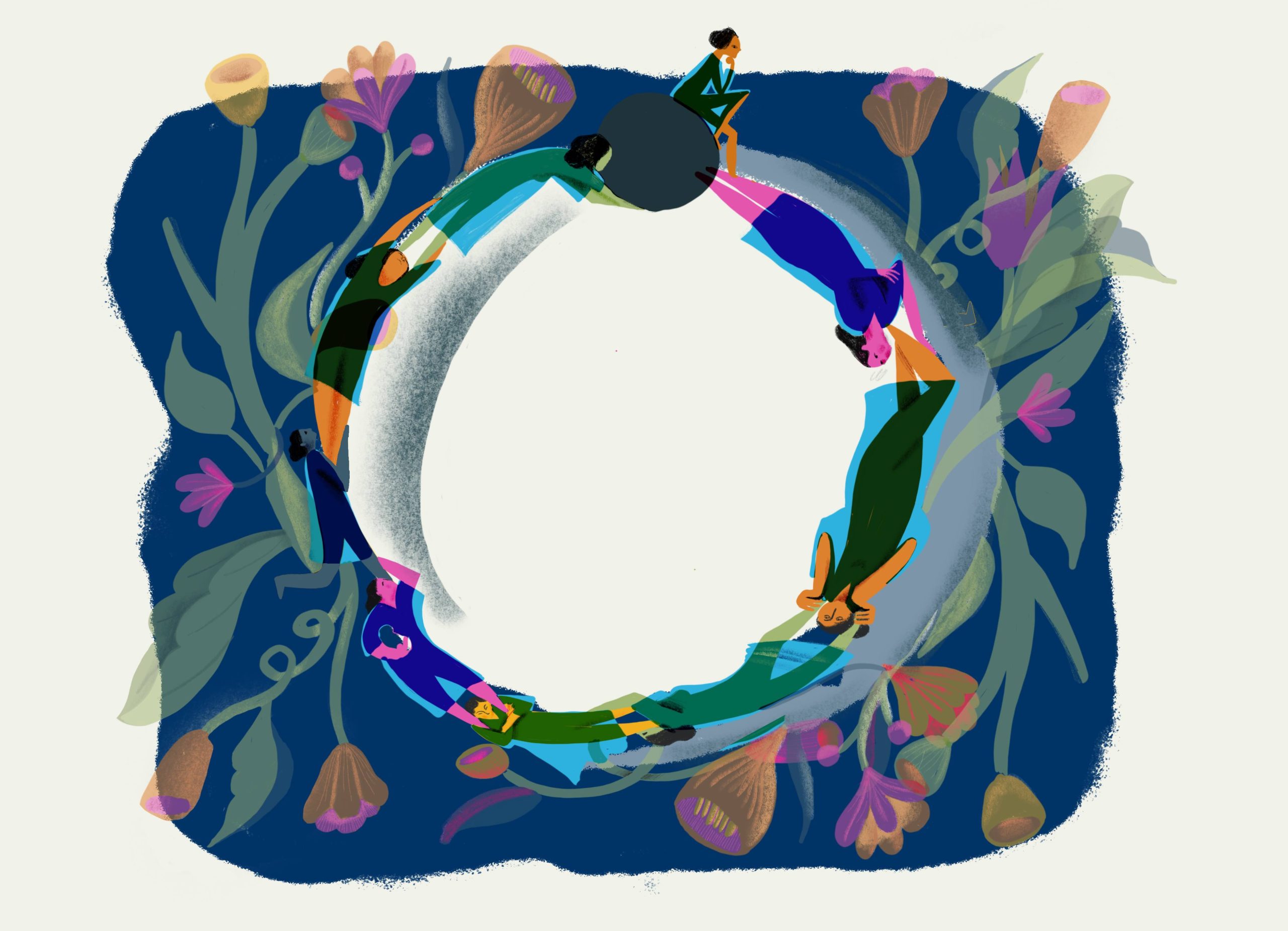 Maya Bernstein, a 2012 Pomegranate Prize recipient, recently published a collection of poetry titled There is No Place Without You. Reviews of Bernstein’s poems describe them as “authentic and honest, spanning the secular and the sacred, speaking truth to our fears and joys, navigating the complex intimacy and distance we experience as humans striving to connect to ourselves, one another, and to the forces that act upon us in the world.”

Sight Line asked Na’amit Sturm Nagel, a fellow Pomegranate Prize recipient and a doctoral student in the English Department at UC-Irvine, to read a selection of Bernstein’s poems and then have a conversation about them. An edited version of their conversation follows.

When did you start writing poetry, and how did you move from writing individual poems to compiling collections of poetry?

I started writing poetry in summer camp, in middle school. The first memory I have of writing a poem is breaking away from the bunk and the kids and going into the forest to sit on a rock. I had one of those moments where the sun was touching the rocks, you know, just sort of where your mind is blown, and feeling like I needed to write.

Why do you think you were drawn to poetry as opposed to any other form of expression?

I’ve always loved to write. I’ve written a lot in professional contexts about leadership and facilitation; about motherhood in blogs and essays; academic pieces and lyric nonfiction pieces; and Torah and idea pieces. In seventh grade I even wrote a novel, which I still have in notebooks. I’ve also written short stories. I’ve played with lots of different genres, but I guess poetry has always drawn me in. There’s something about feeling like you have to be so careful with choosing your language. For me, poetry is connected to trying to capture emotion and feeling. There’s something about trying to capture the inexpressible and the intense in a short form, that is not necessarily logical or linear, that resonated and continues to resonate with me.

How did you go from being an eighth grader writing poetry in the woods in camp to publishing a collection of poetry?

I’m realizing it’s impossible to talk about this without talking about my experience with breast cancer. I was diagnosed with breast cancer and stopped doing a lot of the work I was doing and was forced to slow down my life. That’s when I realized how much I wanted and needed to be writing, and then began to amass enough poems to think, “There are themes here. There’s a story here.” Even though each individual poem in some way stands alone and can be read alone, it’s actually a lot richer and deeper when you look at these ideas together. And then came working on poetry on at least two levels, if not more: trying to craft the individual poems, but then also trying to craft an arc of the story through the poems.

There is no question it’s a healing practice for me. I think it’s always been. I think the eighth grade version of me, writing poetry in summer camp in the woods, was trying to heal around these questions: Do I fit in? Do I not fit in? Who am I? Is who I am accepted and welcomed and embraced?

There’s no question that when I was sick there was something very grounding and healing about writing. In particular, the ability to observe oneself and to observe one’s own experience, and not just be pulled along by it—that’s part of what writing does for me. It allows me to say, “Oh, fascinating: I’m terrified,” or “I’m in pain: how can I try to convey that—to myself, to others?” Poetry gave me the ability to not be swept along by pain, but to be an observer of it.

Has your poetry always had Jewish or religious motifs? What draws you to the poetic form when depicting certain spiritual struggles and themes?

I didn’t realize until a couple of years ago how Jewish my poetry is! I don’t think it always has been. The fact that I grew up Modern Orthodox, studying these texts and saying these prayers and psalms, is sort of ingrained in my poetic training unintentionally. I think it was Rabbi Benay Lappe who first introduced me to the idea that basically all world religions and philosophies are a set of attempted answers to the huge human questions. How did I get here? What am I doing here? What happens after I die? What happened before I was born? What’s the purpose of life? Judaism is the language I use to wrestle with these questions.

I particularly appreciate the intimacy of the poetic voice in your work and the multiplicity of selves, specifically when you describe “standing on my own shoulders.” How has writing poetry helped you explore your identity?

I’m thinking about the title of my collection, There is No Place Without You, which is a phrase from the Zohar. In Aramaic, it is “leit atar panui mineh,” which my great-grandmother had inscribed on a ring and that ring was handed down to me. This expression was used a lot in my family—this sense that the Divine is everywhere, whether you like it or not!

In this collection, I’m coming at this question from the angle of the multiple You. It is the You who keeps changing, who continues to elude our grasps. I struggle with: Who is this You that I’m trying to connect with? The You might be God or the universe, the big force out there that’s bigger than us. But then the You is also the lover and the children and then, somehow, the You is also aspects of myself. When I started playing with writing into this idea that the You keeps changing, that actually helped me realize that the me keeps changing, too. The speaker as a mother is really different from the speaker tapping into my 10-year-old self, or the speaker as somebody in a religious crisis, or a middle-aged woman who sometimes wishes she weren’t a mother. It sort of just happened that I discovered the subconscious layers of selves through the writing.

How do you think putting this poetry together has helped you in terms of creating a more united self, or a more connected sense of self?

I think the first thing that it’s done is that it’s helped surface the complex layers of selves that have been inside me. I don’t think there’s an arc, but there’s a cacophony of messy selves who are in conflict, which is really hard, but in some ways that’s more true to who I am. Who knows how it will evolve, but I had to let them all out of the locked places they were in, which I do think is part of a healing process.

At the end of your poem “Elul Ghazal,” there is a shift in tenses—with “would” and “will” —that makes me wonder about the relationship between the past, present, and future in your work. What role does time play in your poetry and in your own personal journey of healing?

I wonder a lot about whether real change can happen. I think that a lot of my poetry is trying to explore that question. Is it possible to break out of patterns that were set, not just in my own past, but through family patterns and epigenetic patterns? In the present moment, is there something we can do that will not only change the future, but also somehow retroactively change, and heal, the past? That is the theme of my professional work, where I teach leadership and facilitation. I care about trying to help groups of people figure out in the present how to break patterns so that they can create different futures from past models.

I love the idea of “ein mukdam u’meuchar ba’Torah,” or “there’s no early or late in the Torah.” The idea that you can’t read the Torah in linear fashion, that something that seems to happen towards the end of the “story” actually maybe happened towards the beginning. It messes with our idea of the narrative arc. It’s so poetic! I’m trying to play with that idea, with the idea that time is somehow round, and say, on the one hand, here is this thing: language. It’s amazing. It actually can express the inexpressible. But, on the other hand, it’s ridiculous. It’s child’s play in the face of something monumental and magnificent.

Interview conducted by Na’amit Sturm Nagel, for The Covenant Foundation

Maya Bernstein’s writing has appeared in Cider Press Review, Eunoia Review, Harvard Business Review, On the Seawall, Poetica Magazine, Stanford Social Innovation Review, Tablet Magazine, and elsewhere. She is on faculty at Georgetown University’s Institute for Transformational Leadership, Yeshivat Maharat, and the Masa Leadership Center. A graduate of Columbia College and Harvard Graduate School of Education, Bernstein is pursuing an MFA in poetry from Sarah Lawrence College. She recently released an album, Shiviti, with Noah Solomon. Her first poetry collection is There Is No Place Without You (Ben Yehuda Press, 2022). Bernstein received a Covenant Pomegranate Prize in 2012.

Na’amit Sturm Nagel is a doctoral student in the English department at UC-Irvine. She studies American Jewish Literature, specifically comparing the American Jewish experience to the African American and Asian American experiences. Her work focuses on gender, generational trauma and relationships to temporality. Na’amit Sturm Nagel has published op-eds and book reviews in The Los Angeles Review of Books, Moment Magazine, The Forward, Lehrhaus, The Jewish Journal, and Kveller. She received a Covenant Pomegranate Prize in 2019.