Torah On The Run

Instant accessibility and interactivity are the draws of any mobile app, of course, and the newly released PocketTorah is no different. It offers those with Apple or Android devices a unique new way to learn, read and practice chanting Torah and Haftarah portions.

The free app, which launched last month, boasts a full range of content, including entire Hebrew text, English translations, commentaries, and audio, as well as a karaoke-type feature that highlights text on the screen as the user speaks or chants.

“We recognized that people have their devices on them all the time, so why not make it simple and easy to learn complicated ritual whenever and wherever they want?” said Russel Neiss, co-developer of the app and Academic Director of Technology and Media Services at Rodeph Sholom School in New York.

“This is an attempt to harness technology for the sake of Jewish education to make it more effective, easy and fun.”

Since its launch, PocketTorah has been downloaded about 8,500 times, and has an average five-star rating by iTunes users.

The impetus for developing the app was simple enough:  Bar and Bat Mitzvah students lugging around laptops, textbooks, notebooks and other weighty and unwieldy items.

“That was the ‘ahah’ moment,” said Neiss, “when I knew all of them had a mobile device that they took with them everywhere, and which could be used as a teaching tool.”

Neiss teamed up with a tech friend, Rabbi Charlie Schwartz, the Director of Digital Engagement and Learning at Jewish Theological Seminary, and with a grant from the Jewish New Media Innovation Fund, got down to work.

The two had joined to create Jewish technology before, having met in 2009 as Fellows at PresenTense in Israel – Neiss with sponsorship from The Covenant Foundation, and Schwartz with support from the iCenter.

That collaboration led to MediaMidrash, a online platform linking multimedia and innovative content and providing Jewish educators the ability to bring art, animation, film and music directly into classrooms.

The two techies presumed that PocketTorah might be used by students and teachers engaged in Bar and Bat Mitzvah practice.  But they’ve been heartened by reports that its ease of use and portability takes Torah study to entirely new audiences and destinations.

“It’s become a way for people to engage and learn,” Schwartz said. “It’s lowering the barriers.  We expected that those studying for Bar and Bat Mitzvah would use it.  But we know people just driving in their cars are using it too.” 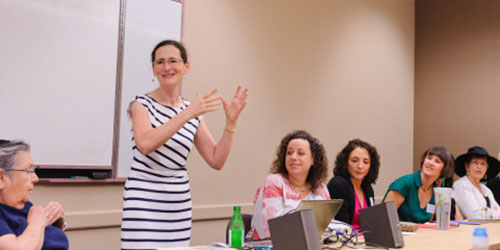 The Art of Learning: Two Minutes of Torah with Rabbi Elana Kanter