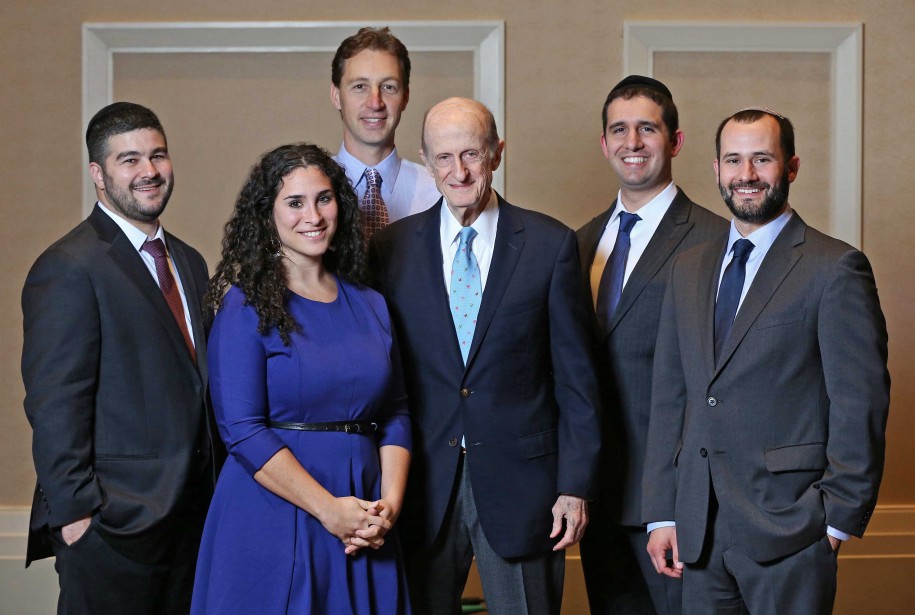 Representing a range of educational venues and approaches, recipients are: Rabbi Jordan Bendat-Appell, Founder and Director of the Center for Jewish Mindfulness in Chicago, and Program Director for the Institute for Jewish Spirituality in New York; Rabbi Michael Bitton, Director of Educational Technology and Judaic Studies teacher at Magen David Yeshivah High School in Brooklyn, NY; Talya S. Gillman, a Jewish educator and social justice advocate pursuing her M.A. in Transformational Leadership in Seattle; Oren J. Massey, Executive Director of Edah in Berkeley, CA; and Rabbi Yigal Sklarin, a Talmud and Jewish History educator at The Ramaz Upper School in New York.

The Pomegranate Prize was established in 2011 and recognizes emerging leaders in Jewish education – those in the field for 10 years or less. The Prize stands next to The Covenant Award, which since 1991 has honored three exemplary Jewish educators each year for their records of innovation and impact across Jewish education settings.

“We know that encouragement early on in a person’s career can make all the difference in their success,” said James Crown, President of Henry Crown and Company and a member of the Foundation’s founding family. He introduced the Pomegranate Award recipients to Jewish lay, communal and educational leaders gathered at the Foundation’s annual award ceremony here today.

The Covenant Foundation is creating a growing network of Pomegranate Prize recipients and providing a laboratory and platform for them as they immerse themselves in foundation-supported professional development and leadership programs, peer-to-peer gatherings, mentorships and other educator initiatives. Counting the 2014 group, there are now 20 Pomegranate Prize recipients, each of whom receives $15,000 to fuel educational projects and their development as change agents in their communities and in Jewish education.

Recipients have the opportunity to connect with thought leaders and extraordinary educators from across the spectrum of Jewish life through events sponsored by the Foundation over a three-year period, and five new educators will join the cohort each year.

“The Pomegranate Prize nurtures the seeds of emerging talent and publicly recognizes potential to contribute to a more promising future for Jewish education,” said Eli N. Evans, Chairman of the Board.

Harlene Winnick Appelman, Executive Director of The Covenant Foundation, added, “A teacher’s passion can spark the interest of a generation and encourage positive social growth. The Pomegranate Prize is a unique and powerful tool to support that passion, not only by identifying new levels of excellence and by encouraging specific innovations, but also by creating a community of problem-solvers, building the skills of individuals, and mobilizing new talent.”

Rabbi Jordan Bendat-Appell is co-founder and director of the Center for Jewish Mindfulness in Chicago, Director of Regional Programing at the Institute for Jewish Spirituality in New York, and Co-Founder of Orot: Center for New Jewish Learning in Chicago. At the Center for Jewish Mindfulness, he created the first community-based Jewish meditation center in the Midwest, and teaches, organizes, and administers trans-denominational programs throughout the Chicago area. At the Institute for Jewish Spirituality, he directs and teaches trainings in Jewish mindfulness practice both regionally and nationally. He was ordained by the Reconstructionist Rabbinical College and served as rabbi at Aitz Hayim Center for Jewish Living in Glencoe, IL. Prior to pursuing his rabbinical studies, he studied Conservation Biology at the University of Wisconsin, Madison, spent several months at Zen centers in California and France, and studied Jewish text at the Conservative Yeshiva and Machon Pardes in Jerusalem. In 2012, he was named on the Jewish United Fund/Jewish Federation of Metropolitan Chicago 36 Under 36 list of influential young Jews.

Rabbi Michael Bitton is Director of Educational Technology and a Judaic Studies teacher at Magen David Yeshivah High School in Brooklyn, NY, where he employs pedagogies such as project-based and inquiry-based learning, and harnesses technology to create a more meaningful and deeper learning experience. Additionally, he works with faculty and staff to help develop and implement engaging curricula. He is a founder of JEDcampNJNY, a professional development and networking organization for Jewish educators and day school leaders, and frequently speaks about educational technology at various events. Rabbi Bitton is a 2013 recipient of the Jewish Education Project’s Young Pioneers Award, and since 2006 has served as a Rabbi and Teen Guidance Counselor at the Minyan Shelanu in Lakewood, NJ. He was ordained by Harav Yitzchak Abadi Shlita, holds a B.A. from Adelphia Rabbinical College, and is currently pursuing an M.A. in Educational Leadership at Bellevue University.

Talya S. Gillman works with Jewish communities to enable them to engage members in meaningful efforts to address social needs using the guiding values of empathy and tikun olam. Most recently, she worked at Repair the World developing social justice curricula for Jewish participants, and spent 14 months in Mumbai as an American Jewish World Service World Partners Fellow. She interned as Associate Director of International Projects for the Task Force on Human Trafficking in Jerusalem, and has served in various capacities at Congregation Beth Shalom in Seattle. She continues to work with Jewish organizations on service and social action both informally and through her current position as Coordinator of Community Partnerships at the University of Washington’s Carlson Leadership & Public Service Center. Gillman is pursuing her M.A. in Transformational Leadership at Seattle University’s School of Theology and Ministry, the learning from which she is eager to use in Jewish values-based communal work. She is a StartingBloc Fellow and a member of the ROI community.

Oren J. Massey is Executive Director of Edah in Berkeley, CA, a Hebrew language afterschool program. Prior to his work at Edah, he was Executive Director of the Center for Jewish Living and Learning at The Jewish Federation of the East Bay in Oakland, CA, where he delivered educational services and programs. Massey has also worked as the Program Director for the Diller Teen Fellows, modeling collaborative partnerships for communities in Israel and North America, and directing an international teen empowerment program. He spent most of his formative years in Israel, receiving his B.A. from Bar-Ilan University in Land of Israel Studies. In 2000, he returned to the United States, and has since earned his M.A. in Non-Profit Management from Case Western Reserve University, and his M.A. in Jewish Education from Siegal College.

Rabbi Yigal Sklarin teaches Talmud and Jewish History at The Ramaz Upper School in New York, where he is also Director of Interdisciplinary Studies. He has integrated technology into Talmud classes, organized interdisciplinary programs, and developed a Jewish History course for 12th grade students. Rabbi Sklarin is a guest lecturer throughout the New York metropolitan area, and has edited and published books and articles for a variety of publications. He earned his B.A. in History from Yeshiva College, where he received the Max and Sophie Manicoff Award for Excellence in Talmud. He received his ordination from Rabbi Isaac Elchanan Theological Seminary at Yeshiva University and was a member of the Wexner Kollel Elyon. He is enrolled at Yeshiva University, where he completed his M.A. and is pursuing a Ph.D. in Modern Jewish History.