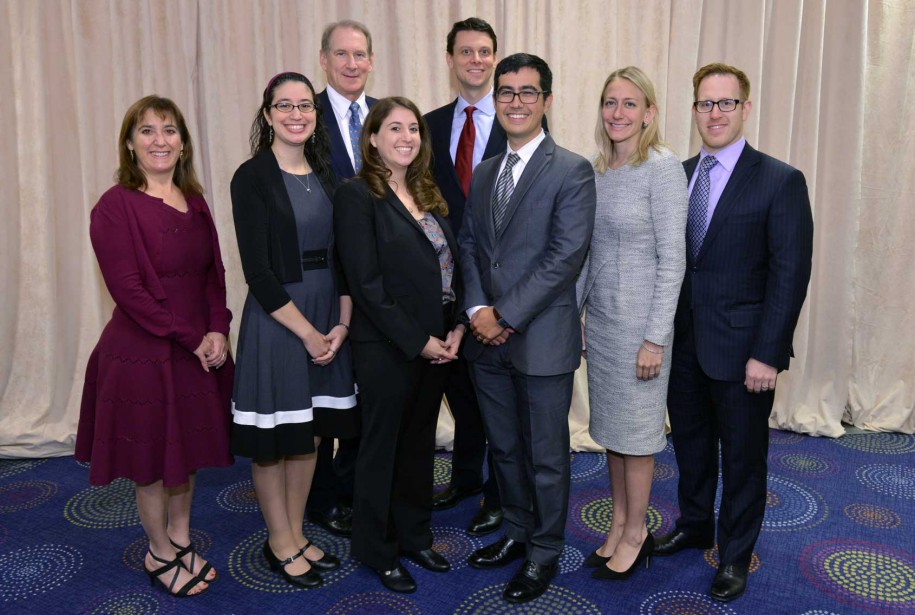 The Pomegranate Prize was established in 2011 and recognizes emerging leaders in Jewish education – those in the field for 10 years or less.  The Prize stands next to The Covenant Award, which since 1991 has honored three exemplary Jewish educators each year for innovation and impact across Jewish education settings.

Reflecting on the genesis of the Pomegranate Prize, James Crown, President of Henry Crown and Company and a member of the Foundation’s founding family, said, “This prize reflects the vision of my father, Lester Crown, who believed that encouragement early on in a person’s career can make all the difference in their success.”

Each Pomegranate Prize awardee receives $15,000 to generate new educational ventures and their own evolution as leaders in their communities and in Jewish education. In addition, over a three-year period and through Foundation-sponsored events, recipients interact and engage with thought leaders and extraordinary educators from across the spectrum of Jewish life.

The 2015 cohort joins an expanding network of up and coming Jewish educators—there are now 25 in the group. Together, they represent some of the most talented and creative young leaders working in the field today.

“We are aware that within the field of Jewish education writ large, there is attrition happening,” said Harlene Appelman, Executive Director of The Covenant Foundation. “The Pomegranate Prize is our attempt to acknowledge that challenge and in response, bolster and retain idealistic, creative and energetic professionals in the field.”

Erica Belkin Allen has served as Assistant Director of Congregational Education at Chizuk Amuno Congregation in Baltimore, MD since the fall of 2012. She received her B.A. from Wesleyan University in 2008, graduating with honors in History and a concentration in Religion, and her M.A. in Jewish Education from the Baltimore Hebrew Institute at Towson University in 2013. In 2014, Erica was elected to a Zeitler Fellowship, awarded to young Jewish adults for their advocacy of Jewish causes and community. Erica splits her time between teaching middle school for Chizuk Amuno’s Krieger Schechter Day School and Rosenbloom Religious School, running family and youth programs, and rethinking how to best engage students as they move past the milestone of b’nei mitzvah. She is currently working on redesigning the middle school Judaic curriculum. When she is not working, she is gardening, hosting Shabbat dinners, or doing outreach work for Baltimore’s young adult Jewish community.

Debbie Yunker Kail is the Executive Director of Hillel at Arizona State University (ASU) in Tempe, AZ, where she has spent the last two years reinvigorating the Jewish student life experience. She works to advance the Hillel movement, sitting on Hillel International’s Measuring Excellence Program Core Team and the Ezra Fellowship Steering Committee. Before coming to ASU, Debbie spent seven years at Hillel at the University of Pennsylvania working with the staff to develop and implement a multi-tiered student engagement strategy. Her Hillel career began when she served as a Steinhardt JCSC Fellow at Washington University in St. Louis. Debbie holds a B.A. in Psychology from Emory University and a M.A. in Higher Education Administration from New York University, where she also worked in residential and fraternity/sorority life and planned a national conference on the Jewish college student experience. She has studied at the Conservative Yeshiva and the Pardes Institute of Jewish Studies, and has completed the Florence Melton Adult Mini-School and Weinberg ACCELERATE, Hillel’s executive training program.

Rabbi Jason Rubenstein is the Dean of Students at Yeshivat Hadar in New York, where he also teaches Talmud and Jewish Thought and develops curriculum, including web-based learning. Jason was ordained in 2011 by The Jewish Theological Seminary (JTS), where he received the Bernard and Sydell Citron Scholastic Prize, the Professor Louis Ginzberg Talmud Prize, and the Rabbi Sidney Greenberg Prize. Jason holds a A.B. in Social Studies from Harvard College, where he received the Harvard Hillel Four Pillars Award for his commitment to Jewish learning, Israel, pluralism, and leadership, and a M.A. in Talmud from JTS. Jason is an alumnus of the kollel of Yeshivat Ma’ale Gilboa, the Wexner Graduate Fellowship, the Legacy Heritage Rabbinic Fellows program at JTS, and the Graduate Fellowship in Jewish Law and Legal Theory of the Cardozo Center for Jewish Law. He has also led multiple programs for the Nesiya Institute. In 2015, Tablet named him as one of “15 American Rabbis You Haven’t Heard of, But Should.”

Rabbi Devin Maimon Villarreal is the Jewish Studies Department Chair and a teacher at deToledo High School (formerly New Community Jewish Day School) in West Hills, CA. Devin helps create and oversee curricula and provides mentorship and resources to teachers. He also serves as the faculty mentor for several student initiatives and projects. In addition to ordination from Yeshivat Chovevei Torah, where he was also a Wexner Graduate Fellow, he holds a B.A. in the Study of Religion from UCLA and a M.A. in Teaching from the American Jewish University. Together with his fellow faculty members, he seeks to create a school environment that fosters Jewish commitment, meaning, and growth through the implementation of rigorous and soulful curricula. Most recently, he has been working on a middot/character driven Talmud curriculum and a series of Jewish Studies courses integrated with disciplines such as Speech and Debate and Media Arts.

Lea Winkler is a third grade general studies teacher and the STEM Coordinator at Cohen Hillel Academy (CHA), a community Jewish day school in Marblehead, MA. Lea began at CHA as an intern through the DeLet Program at Brandeis University and obtained her first full time position at CHA upon her graduation. Lea received her B.A. in 2009 from Brandeis University, where she majored in History and minored in Elementary Education, and her M.A. in Teaching Elementary Education from Brandeis in 2010. During her time at Brandeis, she taught at the Boston-Area Jewish Education Program (BJEP), an independent Jewish Sunday school, where she began as an aide and became the Hebrew teacher for second through fourth grade. In this capacity, she received the Keter Torah Award for outstanding contribution to the Hebrew language curriculum. Lea also spent six summers working at Camp Ramah in Nyack, first as a counselor and then as a mentor counselor, and has led Junior Congregation at the Huntington Jewish Center.