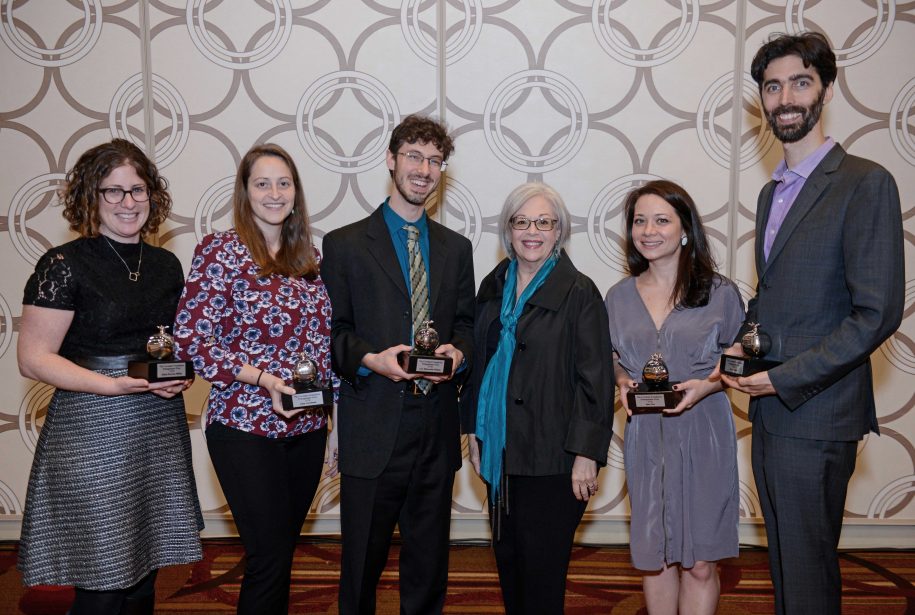 Los Angeles, CA – Nov. 13, 2017 – Five emerging Jewish educators received the 2017 Covenant Foundation Pomegranate Prize today at the annual Pomegranate Prize breakfast event. The year’s cohort includes practitioners working in a variety of settings, from synagogue to summer camp and beyond, all dedicated to making a difference in the field of Jewish education.

The Pomegranate Prize, inaugurated in 2011, is designed to honor rising leaders who have been in the field of Jewish education for up to ten years. By encouraging Prize recipients in their pursuits, enabling them to accelerate their professional development and amplify their impact on the field, The Covenant Foundation aims to nurture Pomegranate Prize recipients in an intentional way, and empower them to take risks and make a difference in the field of Jewish education.

The Prize stands next to The Covenant Award, which since 1991 has honored three exemplary Jewish educators each year for innovation and impact across Jewish education settings.

“All five of the 2017 Pomegranate Prize recipients inspire us with their dedication and promise,” said Cheryl R. Finkel, Board Chair of The Covenant Foundation, as she presented the 2017 prizes. “It is thrilling to know that they now join an expanding network of rising Jewish educators who are transforming the field. We can’t wait to see the connections they form and the creative initiatives that are bound to emerge.”

In addition to the Pomegranate Prize award ceremony, the breakfast program included a presentation by Alicia Jo Rabins, a Portland-based writer, musician, performer, Torah teacher and creator of the Girls in Trouble project, who shared music and midrash on the story of Hannah, and a talk by Jessica Lahey, an educator, writer, and author of the book The Gift of Failure: How the Best Parents Learn to Let Go So Their Children Can Succeed, who spoke about fostering intrinsic motivation and resilience in kids.

“Each year we gain even more than we give to these bright, energetic and empathetic educators,” said Harlene Appelman, Executive Director of The Covenant Foundation, who offered a greeting to the crowd this morning. “The Pomegranate Prize process continues to reveal truly devoted educators, who are ‘in it’ to make a difference.”

Aliza Goodman is the Director of Professional Development at The iCenter, where she has served for over eight years in a position that focuses on growing the field of Israel education. She currently leads the design and implementation of The iCenter’s professional development initiatives for Jewish educators across North America. In this role, she is building a team that experiments with ways to help educators infuse Israel into their settings, grounded in personal relationship building with Israel and Israelis. Most recently, her focus has been on developing criteria by which to measure success and articulating best practices in Israel education for educators in the field. Her commitment to and passion for Israel was ignited during childhood family trips to Israel from her home in Toronto. Aliza holds an MBA in Social Policy and Management and an M.A. in Jewish Professional Leadership from Brandeis University.

Rabbi Alissa Forrest Miller is the Associate Rabbi at Temple Isaiah in Lafayette, California. In this position, Alissa focuses on youth, young families, and teens, while also engaging in traditional pulpit responsibilities. As the director of Noar Night, she re-envisioned the Wednesday night teen program by changing the structure and updating the curriculum to meet the social and emotional needs of the teens, while also teaching Judaic content. After creating a family retreat and successfully re-imagining the synagogue’s family Shabbat services, Alissa created Kulanu, informal Jewish family programming in the style of a youth group. She also directs Camp Kefli, the synagogue’s end-of-summer day camp. Alissa is continuously seeking new opportunities to strengthen community, enhance leadership and character development, enrich spirituality, and provide more social justice learning in these programs. Alissa received an M.A. in Jewish Education and her rabbinical ordination from Hebrew Union College-Jewish Institute of Religion in Los Angeles.

Rabbi Lev Meirowitz Nelson is Director of Education at T’ruah: The Rabbinic Call for Human Rights. In that role, he has written and edited T’ruah handbooks on ending mass incarceration, fighting human trafficking, and the new sanctuary movement. In addition, Lev wrote T’ruah’s Haggadahon fighting human trafficking. His resources have been used by activists and congregations across the country. Lev also serves part-time as Religious Director and sole clergy member at the Flatbush Jewish Center, a Conservative synagogue that is undergoing a period of revitalization. In 2013, Lev was ordained by the Rabbinical School of Hebrew College in Newton, Massachusetts, where he was a Wexner Graduate Fellow. Before attending rabbinical school, Lev taught fifth grade at the Solomon Schechter School of Manhattan for three years. He graduated Phi Beta Kappa from Brown University with a B.A. in geology.

Yoni Stadlin is the Founding Director of Eden Village Camp in Putnam Valley, New York. A talented educator and community builder, Yoni founded Eden Village in 2008 as the country’s premier organic farm camp for farm education and sustainability. Prior to Eden Village, he directed the 92nd Street Y’s science and nature day camp, was an educator for the Teva Learning Center, and traveled and taught in the American Jewish World Service in an educational sailboat. Yoni also co-organized earthquake relief trips to India and Turkey and led Birthright Israel trips. On two separate occasions, he devoted several months to an environmental protection initiative by living in ancient redwood trees slated to be cut. Currently, Yoni is expanding Eden Village to California with the launching of Eden Village West, opening in summer 2018. Yoni received an M.A. in Informal Jewish Education from the Jewish Theological Seminary.

Jane Tuv is Director of Programs for Russian-speaking Children and Families at JCC Manhattan’s Generation R department. Under her leadership, program offerings catering to Russian-speaking Jewish families and children have tripled and a vast number of underserved Russian-speaking families have increased involvement in Jewish life. Additionally, Jane is the co-head teacher in a 2’s classroom at Educational Alliance Preschool and the founding director of Arlekino Theater Troupe, a performing and fine arts program that connects children to their heritage through cultural arts. Arlekino has partnered with more than 20 Jewish organizations in the tri-state area to bring arts education to the RSJ diaspora. Jane also founded Kinder Klub, a Queens-based infant and toddler program dedicated to exposing young RSJ families to Jewish holidays, traditions, and values. As an informal Jewish educator, Jane designs programs with a focus on the Reggio Emilia approach, nurturing children’s curiosities, imagination, and self-expression. Jane received her B.A. in Communication and Media Studies at Fordham University.