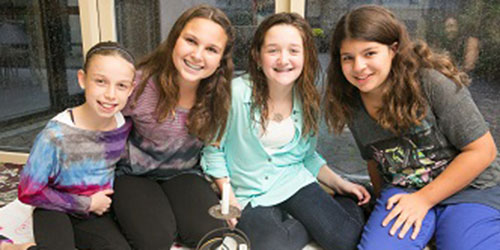 ARTICLE Listen, Then Do: Lisa Farber Miller’s Secret to Success

Before Jewish parenting blogs, mohels with websites or online guides to picking the perfect Hebrew baby name, Lisa Farber Miller, a nonprofit consultant from Denver, Co., had what seemed at the time like a radical idea: A glossy newsletter for expectant and new parents, about how to incorporate Judaism into their family lives.

This newsletter would include recipes, activity ideas, glossaries of Hebrew terms and thoughtful commentary on holidays and traditions. One regular feature would explicitly, and warmly, address interfaith families.

“Some people felt like if I even included something like that, I had to come out with a strong statement about the fact that intermarriage was a negative thing,” Farber Miller recalled. “I felt like that wasn’t the kind of inclusive message we needed to be sending.”

In 1994, Farber Miller -- who was knee-deep in a major consulting project helping Denver’s Jewish Community Center reinvent itself -- received a grant from the Covenant Foundation to create the newsletter, Apples & Honey. It was the beginning of a mission that came to define her career: Finding creative ways to bring in Jews on the periphery by filling their needs in an appealing, non-judgmental way, at junctures in their lives when the desire for connection and meaning is most pronounced.

“We’re the 16th largest Jewish community in the country, and anytime you have a market where 65 percent of your customers aren’t using you, you’ve got to think differently,” she said. “People are not going to necessarily come to us anymore. We need to go to them and prove our value and our worth and the beauty that Judaism can bring to their lives.”

For the past two decades, Farber Miller has done just that, as the Senior Program Officer for Jewish Life at Rose Community Foundation, which is dedicated to improving the quality of life in Greater Denver (other program areas are the Aging, Health, Education and Child and Family Development). Farber Miller shaped the foundation’s approach to Jewish grant-making, to focus on welcoming, innovation and a perennial quest for new ways to “connect Jews to Jewish life and to each other.” During 18 years on the job, she has stewarded more than $53 million in grants.

When it comes to bringing in Jews on the margins, Denver presents an interesting conundrum or, as Farber Miller would say, opportunity. She calls it the “native/non-native issue.”

A 2007 demographic study found that a third of Jews ages 25-39 had been in the Denver-Boulder area for less than five years. In many of those homes, one partner is not Jewish.

Though technically not a native, having moved to Denver when she was 18 months old (“It doesn’t count,” she explained), Farber Miller, 60, is the ultimate insider: She met her husband, a fifth-generation Denverite who is now president and chief executive of the Denver Foundation, in the seventh grade, and two of their three grandchildren are seventh-generation Denverites. Still, she has remained keenly attuned to the perspective of the new and disconnected.

“Those people have left their families of origin and are here without the support of family, and maybe can’t afford to belong to a synagogue or maybe don’t see a synagogue as a place where they want to be,” she said. “That’s a tough place to be.”

Many of the projects that Farber Miller has championed target parents with small children. She cites not only the yearning for community that new parenthood often brings, but research on the importance of early cognitive development.

“Even values are formed by the age of five,” she said. “I’m hoping that early childhood and early family engagement will be the next wave in the Jewish world, and people will get on the boat with us.”

To this end, in 2009, Farber Miller helped create MazelTot.org, a website for local parents of young children that quickly became a popular destination -- and a crucial marketing tool for Jewish institutions. MazelTot.org features a calendar listing programs and events for young kids (family getaway at the 400-acre JCC Ranch Camp, anyone?) and offers generous discounts on everything from preschool tuition to ceremonies officiated by a rabbi “or ritual leader.” Beyond surfing for information in isolation, parents are invited to contact one of a dozen “parent connectors,” whose pictures and home neighborhoods are posted online.

“We often get calls from families who are relocating to Denver before they’ve even moved,” Farber Miller said. And while it can be maddening to try to find a human being behind many websites, MazelTot.org has a full-time staffer with a listed number. “He talks to parents all day long,” she said.

MazelTot.org has repeatedly been cited in the Slingshot Guide as one of the nation’s most innovative Jewish nonprofit projects. A recent evaluator determined that the website was “truly moving the needle on Jewish engagement” and urged other communities to “learn from this model and replicate locally.”

Also in the early childhood space, Ms. Farber Miller has spearheaded an effort called BUILDing Jewish ECE, to improve Jewish preschools (or Early Childhood Education centers), help them draw a wider audience, and integrate preschool families into synagogues and community centers so they aren’t lost to the community when their children go off to kindergarten.

And then after kindergarten? Another demographic group Farber Miller is determined to reach: teenagers. In particular, she has come to see philanthropy as a powerful way to excite and inspire young Jews.

“The teen years are when young people are creating their identity and asking themselves, ‘Who do I want to be when I grow up?’ and ‘What’s the good I want to do in the world?’” she said. “Hopefully we will be by their side, to inspire and inform the good that they want to do.”

Of all the programs Farber Miller has created, one of her favorite is Rose Youth Foundation, in which teenage “board members” learn about Jewish values related to giving and tikkun olam. Then, as a group, they determine grant priorities and conduct extensive research to select worthy grantees. Through RYF, Jewish teens have given away more than $700,000 in 14 years.

Jono Bentley, a member of the Stanford class of 2015, had little interest in the organized Jewish community when, in high school, a friend from his jazz band mentioned RYF.

“The opportunity to give $60,000 a year as teens is totally unique and was more intriguing to me than a traditional youth group, or what I knew of them,” said Bentley, who joined RYF and, during his senior year, served as co-chair. “It was very much the catalyst that reengaged me in the Jewish community.”

Bentley is still in touch with Farber Miller. “She is always having coffee with RYF alumni when they’re back in Denver on college breaks,” he said. “She’s very dedicated to keeping a strong connection.”

At a time when many Jewish institutions find it challenging at best to reach those on the periphery, what is Farber Miller’s secret to success?

“The most important thing is to listen first, and to understand people, and to not make assumptions about people,” she said. “Learn from the people you’re trying to connect with. Really understand where the gaps are.”

When Farber Miller organized and funded focus groups of teenagers recently, she found that the very experience of being listened to had a palpable effect. “The teens loved it,” she said. “A couple of parents called up and said, ‘What were you doing with my teen in this focus group? They came back and said this was one of the most powerful Jewish experiences they’ve ever had!’”

In her ongoing search for new ways to reach Jews on the margins, Farber Miller is both philosophical and practical.

“It’s learning how to answer the phone, and actually answering the phone, and promptly returning people’s phone calls,” she said. “It’s also being sensitive to the diversity of the human experience.”

A Resource Website for Jewish Toddlers (and their Parents)