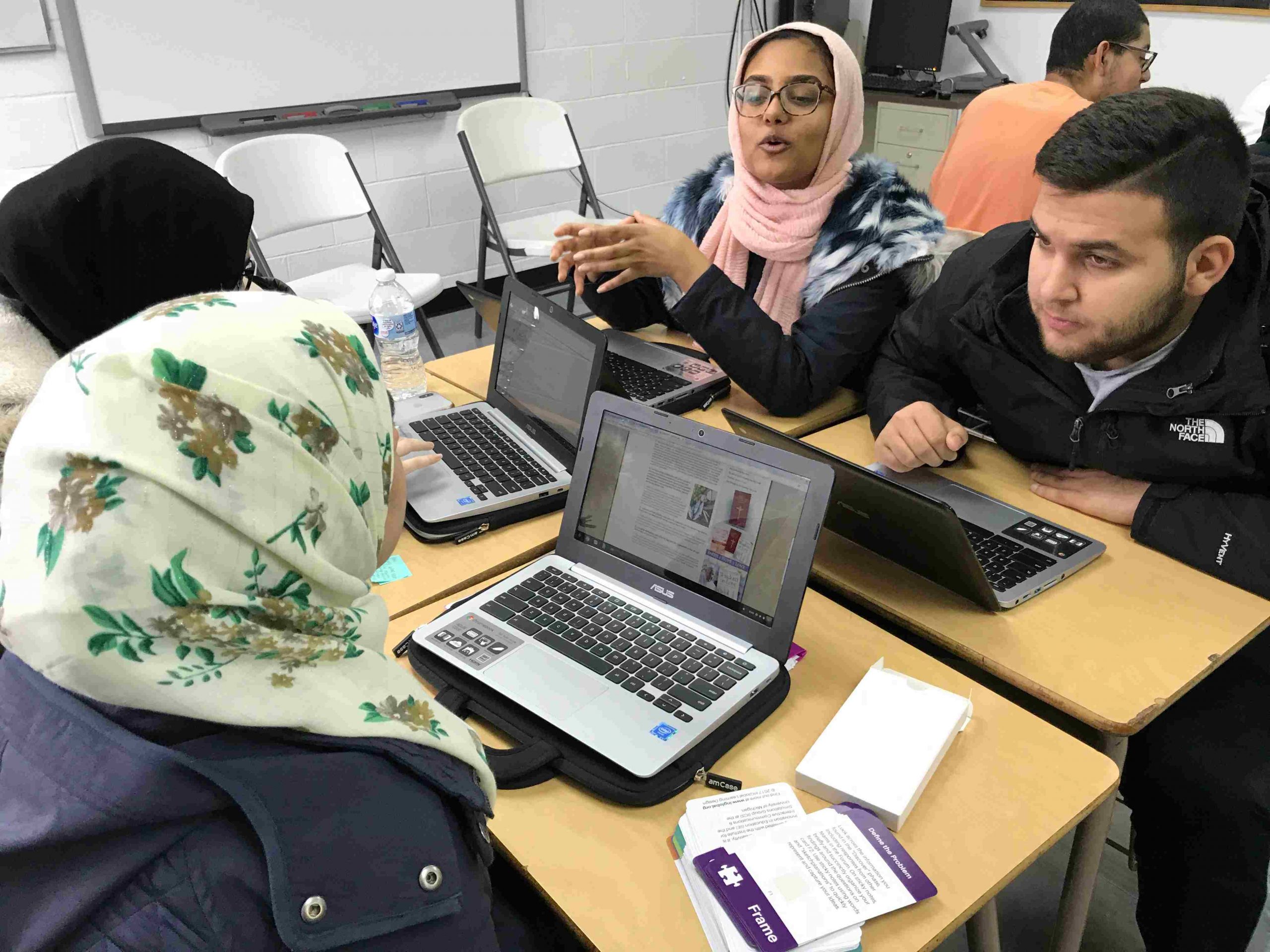 ARTICLE Like Stars in the Universe: Designing a Dream School for Multiple Faiths

If you happen to walk by a high school, you’re likely to see teenagers sitting together in tight-knit friend groups. Most likely, however, they won’t be speaking to each other. Rather, they’ll probably be immersed in the virtual world of their cell phones.

It’s a common sight these days -- not just around schools but in parks and restaurants, too. Though they come from a wide variety of backgrounds, one thing Generation Z shares is an addiction to their cell phones.

Indeed, the majority of teens today prefer texting and social media to in-person communication. While these technologies have opened up incredible opportunities for today’s students to hear a wide range of voices from teens across the planet who are different from them, passively reading from the safe distance of a cell phone screen is simply not the same as encountering diversity face-to-face. In today’s divisive political climate, there is no doubt that teens need to develop robust communication skills now, so that when they enter college, they will be able to converse respectfully in-person with those who do not share the same political views, religion, gender, race, socioeconomic background, and more.

Now, a new pilot program called The United People of Faith (UPF) project will aim to do just that kind of preparation. A partnership between InGlobal Learning Design and the Interactive Communications and Simulations Group at the University of Michigan, with funding provided by The Covenant Foundation, the UPF project, which ran for the first time in Jan-March 2018, brought together middle and high school students from De La Salle North Catholic High School in Portland, Oregon, Jewish Day School of Metropolitan Seattle, and Toledo Islamic Academy in Ohio. Their charge: to design a school that would honor all three faith traditions—Catholicism, Judaism, and Islam—and, in the process, increase cross-cultural understanding, build empathy for peers of other faiths, and practice communication and collaboration skills with a diverse group.

“We see the need for programs like United People of Faith in too many parts of our world,” said Jeff Stanzler, UPF Co-Director and a member of the Educational Studies Faculty at the University of Michigan School of Education. “This seems especially to be the case among young people, which makes it incumbent upon us as educators to seek inventive ways to provide our students with these kinds of opportunities.”

For students used to studying side by side on a daily basis with peers of the same religion, like those who learn in a Jewish Day School setting, it could have been intimidating to join the project. It isn’t easy for adults to venture beyond their comfort zones, let alone teenagers. And it can be hard to know what to say and what to talk about when the usual small talk might not necessarily be familiar (e.g. holidays, schoolwork, family life). No one likes to have awkward conversations, teenagers least of all, which is often why they prefer texting, as it provides the time and space to craft just the right response, instead of being on the spot in the moment.

Stanzler, however, was confident that students would want to participate in UPF. “Our team members [at the University of Michigan] share a fundamental belief that most people are eager to meet and learn more about people whose lives, and ways of thinking, are different from their own,” he said.

It turns out, he was right. Despite the challenges and the uncertainty they would face, students were very eager to participate in the program. “We found that many of the students were hungry to not only learn more about people from other faith traditions, but to teach one another about their respective traditions and practices,” Stanzler said.

Gloria Joseph, a recent graduate from De La Salle North Catholic High School, explained that what piqued her interest in the program was that fact that her school is actually one of the most diverse in Oregon and their senior year curriculum focused on faiths from around the world. Dalia Cape, a recent graduate of Jewish Day School of Seattle, expressed similar interest in learning about other faiths: “I wanted to participate in the UPF project because I found the concept of a multi-religious school quite interesting,” she said.

Over nine weeks, student groups used design thinking to drive their creative process. In the first phase, they learned about each other’s faiths. Then they developed problem statements and needs statements. Next, the students brainstormed potential solutions to the design challenge based on the needs of each faith. This phase was followed by prototyping and feedback.

Receiving feedback on their designs was a critical part of design process and was also a window into the faith practices of their peers.

“Our Theology teacher would go around and meet with the groups and would talk to us about any flaws in the system that needed to be corrected,” Gloria explained. “When we’d get that correction we would do extra research on our own to see what would fit better.”

For instance, upon learning that her proposed basketball uniform’s compression shirts would not be appropriate for the Muslim dress code, Gloria researched other options and found that dry fit joggers were loose enough for modesty purposes but also have a cuff at the bottom to prevent the baggier style pants from sliding off your feet. Little tweaks to designs like this one were key in making sure students of every religion would feel comfortable in the school.

And as it happens, communicating with peers from other faiths was not as challenging as might have been expected and was made easier by having the common goal of designing the school, students reflected.

“It was no different than if I was working with one of my friends who was Jewish,” Dalia shared. “There seemed to be no religious separation between all of our ideas because we were all working to be inclusive of all three religions. We shared a common goal and were doing the same work.”

Gloria pointed out that communication across faiths cannot be based on what the media might say and what other people think, but rather on mutual understanding, sincere listening, and commonalities.

“It’s just better to sit and listen to where [the other students are] coming from and then see where it connects with your own experience in life,” she explained. “Communication is based on listening more than speaking, and understanding more than inferring or making assumptions about people and their beliefs. The more you understand, the more you can work with someone to make an important product, article, or whatever you want to achieve. ”

The skills developed in UPF also made Gloria more comfortable speaking with a Muslim friend from her own school and more open to learning about the friend’s faith and experiences of living in a war-torn area in Syria.

The students’ mutual understanding and respectful listening led to an important discovery: a universal desire for expressing individuality within the boundaries of each religious tradition. Despite coming from different faith-based cultures, they all had the same fundamental expectations for the school.

“We all wanted to feel safe, protected, and wanted our individuality respected. That was crucial,” noted Gloria. Her group focused on clothing and had to do background research on what is acceptable attire for someone from the Muslim, Jewish, and Christian faiths. Although they designed the school uniforms to be comfortable for students of each faith, individual expression was encouraged. For example, Muslim students could choose to wear any color hijab, and everyone could choose their own shoes and accessories. At the end the month, there would also be a free day when everyone could wear their own clothing.

Another student group designed the cafeteria and focused on making a wide variety of foods available.

“Students charged with thinking about eating and food preparation decided that the school would have a farm onsite so that students could participate in every phase of the process that leads up to their sitting down for a meal,” Stanzler shared. “Students who attended to the various kinds of spaces within the school envisioned an ‘orientation room’ near the entry to the school where students could share personal artifacts, stories and other information related to their respective faith traditions.”

Gloria noted how they wrote welcoming language on the school’s banner. They also included a prayer room and a miniature mosque for the Muslim students, a chapel for Christians who wanted to go to mass, and a synagogue where Jewish students could pray. Each classroom would also contain holy books from all three religions.

One of the most important lessons from UPF was that diversity can truly be advantageous. Dalia noted that collaborating with a diverse group enables everyone to bring their unique knowledge to the table. You might know little about a certain topic but your peer from a different background might know a whole lot.

When there are multiple viewpoints and perspectives, everyone can learn and benefit, and the experience of collaboration is that much richer.

“For the design on the shoes of the basketball uniform, I used purple, blue, pink, and white,” Gloria said, “like the colors you see in photographs of the universe. There’s that variety of colors, so I imagined how we’re like stars in constellations; we’re all different and we come together to make something extremely beautiful.”

By Yonah Kirschner, for The Covenant Foundation

Do Children in Jewish School Need More Contact with Those of Other Faiths? (The Jewish Chronicle, September 23, 2018)