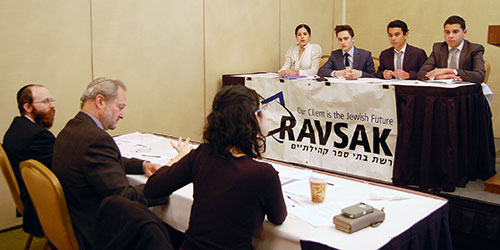 The staff of a Jewish summer camp finds itself under tremendous pressure to buy local, organic food. But to do so would mean placing a significant financial strain on the camp and potentially reduce its ability to offer scholarships. What should the camp do?

A woman needs a bone marrow transplant. She is matched with a donor though Gift of Life, a bone marrow foundation. Her donor defaults. What is the penalty?

A teenager has been warned not to drive after dark. His friend lends him a car. He breaks the rules, has an accident, severely hurting someone. Who are the responsible parties?

“These are morally fraught, scientifically and financially complicated questions--and these are issues that might unfold in the lives of our children and students,” says Dr. Marc Kramer, Executive Director of RAVSAK: The Jewish Community Day School Network. “And we’re looking at what Jewish law has to say about these issues,” he explains.

In particular, Kramer is referring to the issues examined and mulled over in the Moot Beit Din program that RAVSAK has been running since they first received a grant from The Covenant Foundation to maintain and build out the pre-existing program in 2011. Through Moot Beit Din, high school students apply Jewish law, halacha, to contemporary issues like cloning, internet privacy and farming practices. The year-long program culminates in a competition—held in a different community across North America each year—that brings all participating students together to present oral reports and argue their cases in front of a panel of halachic experts.

At its core, Kramer advises, Moot Beit Din is still about bringing Jewish texts to life for students. But he explains that as RAVSAK began to really “be” a Covenant grantee, the program changed in numerous ways. Thanks to access to the Foundation’s staff and the networking that happens during a Covenant grant period, the RAVSAK team began to identify ways in which they could enhance the program, like adding a community service element to the shabbatonim competitions, bringing in compelling scholars and local residents to run workshops and encouraging students to explore the communities they visited.

And that was just the beginning. “We also identified an opportunity to network the educators we were working with,” Kramer adds excitedly. Now, RAVSAK treats those teachers who study with and train the Moot Beit Din students to their own shiurim on topics that the students are also wrestling with. “By doing so,” he explains, “we’re building a network of educators on the notion that the good work they do can have a positive impact on the academic lives of other schools. If a teacher writes a lesson plan in Miami and it’s picked up and used by a teacher at a day school in Los Angeles—that’s fabulous.”

Another significant outcome of the Moot Beit Din experience is the community-building that happens amongst day school students across the country. “Look, no matter where you are,” Kramer attests, “if you go to a Jewish high school, you are in a minority. And even in the big cities, this can be isolating. But through these yearly events, our students have begun to feel like they don’t just go to a school of 120 kids, but rather, they now know 100 other kids who also go to Jewish Day School.” Kramer shares that Moot Beit Din participants have formed real bonds—setting up their own Facebook groups and even planning inter-school Shabbat weekends.

When one considers the root motivations for Moot Beit Din—the development of a student’s deep and abiding knowledge of Jewish text—together with the engagement that the participating students feel with the community that forms around the competition, it becomes clear that this is much more than a high school mock trial program. Rather, Moot Beit Din is precisely the type of educational programming that has the ability to tether students—in the best way—to Judaism and Jewish life.

“I think Jewish identity without content is something of a hollow shell,” Kramer says, expanding on the idea that Jewish literacy is central to the mission of raising kids who will stay involved in the Jewish community, something Kramer has written about before. “We are a content people,” he continues. “And at RAVSAK, we want our work to be about advancing Jewish literacy.”

And so their work continues. Through the lens of Moot Beit Din, the RAVSAK staff identified yet another opportunity for enhancing Jewish literacy with the creation of JCAT: Jewish Court for All Time, a program funded by a Covenant Signature grant in 2013. Aimed at middle-schoolers, JCAT immerses students into the background of a character from Jewish history. Ultimately, students take on their character’s persona and make cases from that character’s vantage point in a simulated digital “court” space.

Kramer explains that JCAT removes the boundaries of the typical 6th grade classroom and instead creates a digital community where students can dig deep into Jewish history. “We want our students to have the content, to know the ideologies, to understand who Jews are, in multiple settings.” Beyond that, he adds, JCAT offers an opportunity for students and teachers alike, to be more than sole observers, and to see themselves as actors in the ongoing narrative of the Jewish people.

“Ultimately, deep rich engagement in Jewish life requires knowledge,” Kramer posits. “And when you do have that literacy, the whole world is open to you.”